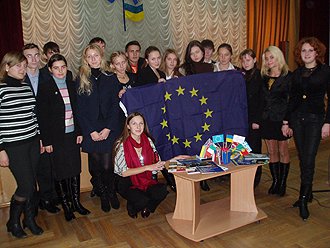 The European Club "The Vikings" is a team of students and teachers who working together increase their knowledge of Europe and European integration, spread the information on this subject at the gymnasium and in their socio-cultural environment.

The first European Clubs at schools were founded in Portugal, later this tendency spread around Europe. In Ukraine the first clubs appeared 10 years ago in Lviv. The idea of European Club creation was supported by the students of Scandinavian Gymnasium. Our Euroclub started its activity in 2006.

The aim of its activity is:

Historically, geographically and culturally Ukraine is a European state. Therefore, admission to European institutions is natural and appropriate for our country. What does it mean to be a "European"? Can Ukraine become a member of the EU? What is the "European education"? To find answers to these and many other questions, to acquire knowledge about countries-members of the European Union, the students of Scandinavian Gymnasium have joined the Euroclub. 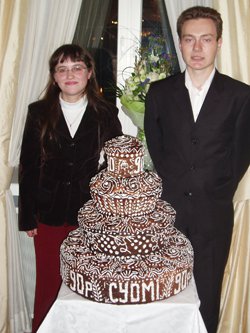 Our club has wide international connections with educational establishments, especially Scandinavian. During its lifetime a lot of meetings with the students from Denmark, Sweden, and Finland have been held. In April, 2006 and in April, 2008 the delegations from Denmark and Sweden visited our gymnasium. These meetings are not only useful for our school but also enable us to feel ourselves citizens of Ukraine and at the same time an integral part of the European Community. The study of Scandinavian languages is a specific feature of our gymnasium. But every language will be "dead" if we don’t learn the culture and the traditions of countries the languages of which we study. Therefore, the students of our school - members of the Euroclub - pay much attention to studying culture, ceremonies, traditions, history of these countries. Annually, on December, 13 the holiday of Santa Lucia- the national holiday of Sweden - is celebrated. We also celebrate the national holidays of Finland.

Since 2007 the traditional "Northern Lights" festival is held at Scandinavian Gymnasium. Not only the students but also their parents take part in this holiday. The aim of this festival is to give a presentation of our gymnasium, to establish partner relations, to encourage students to study Scandinavian languages, to popularize innovations of metropolitan education. The Ambassadors of Scandinavian countries, representatives of the authorities, of public and international organizations, funds, Scandinavian enterprises which work in Ukraine, teachers, and mass media take part in it.

The activity of our Euroclub is not limited only to the study of folklore, cultural and historical traditions of other countries. The work in the club teaches independence and responsibility. In the meetings it is impossible to be a casual observer, all participants of the club are independent are responsible for their own parts of common work. Forming these character traits is very important, especially for a citizen who lives in the democratic society under the conditions of market economy.

The members of the Euroclub have initiated the following projects: "Ukraine Heads for the European Union", "The History of Germany’s Admission to the European Union ","The History of Finland’s Admission to the European Union ". The students who work in the Euroclub also do much practical work – the club prepares them for future education, life and work in the united Europe. Lectures, presentations, active participation in the meetings give students thorough understanding that Europe which in fact provides a great many opportunities in turn expects a lot from them. The common market of labor and education is gradually becoming a reality, and thus, it is well worth while getting ready to use such opportunities as early as at school.

The Club activity teaches to efficiently socialize with children of the same age. In time of integration and globalization the ability to effectively communicate is of paramount importance for everybody.  Our Club members took part in the Ukrainian workshop "The European Clubs of Ukraine: Activity and Prospects" (2006), in the Kyiv forum "The Tasks of Young People for the Future" (2007), in All-Ukrainian regional conferences for senior pupils “The UN Model. Kyiv – 2008”, “The UN Model. Kyiv – 2009”.

And the most interesting activities in our Club are of course our journeys to different European countries. From 2005 to 2009 the students of our gymnasium visited Hungary, Poland, Czech Republic, Romania, Bulgaria, Austria, Slovakia, Germany, Scandinavian countries.