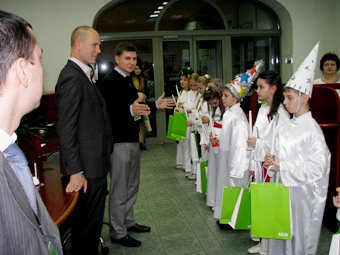 On December, 11 the students of the 5G form of Scandinavian Gymnasium congratulated heartily the employees of the Swedish SEB Bank on traditional Swedish holiday of Santa Lucia which is celebrated on the 13th of December in Sweden. The students dressed in national costumes told the employees of the bank about the history of Santa Lucia and sang traditional Swedish songs.

After the performance an interesting tour of the bank building was organized for the children. The representatives of the bank - the Acting Chairman of the Board V. Vorotnikov, Deputy Chairmen of the Board Peter Akselsson, V. Pavelko, M. Shukyavichus – were deeply impressed with the students’ performance and their fluent Swedish. The bankers were pleasantly surprised not only at the students’ language skills but at their thorough knowledge of Swedish traditions though the children have been studying the language of the northern country only for a year.